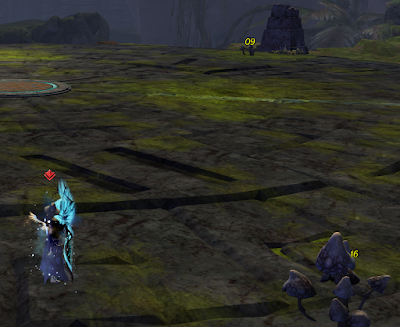 While I still haven't gotten through the first new boss yet, a bunch of nice guys from the Oopsy guild helped me set up markers and timers for the whole new raid wing.

New raid wing today, and although I don't have a l33t crew to march through it on day one, I do have an update for the overlay for the first boss: Slothasor.
The markers included in this update mark the exact position of the imbued mushroom spawns around the arena.

You can grab the new build here.

After the last update I noticed an issue where no matter the framerate of the game or TacO, the range circles and the tactical compass seemed to be constantly glitching when the player was moving. After investigating the issue, it looks like the actual data sent by the game client through the mumble link API might not be taking in account some sort of interpolation of the character position while moving. This results in small jumps of the character compared to the camera, and in turn introduces the jitter.

I updated TacO to somewhat combat this issue. I'm now averaging the camera-space position of the character, which does introduce some latency when the camera changes rapidly, but in turn smooths out the larger jittery issue.

You can grab the new build here.