How to create your own Marker Pack

I would like GW2 TacO to be useful for many people. It was easy to use the tech I built to help out in Spirit Vale, but placing a few directional markers and setting up some locational timers isn't too much work, and the raid audience is limited. This system can be used for so much more, and with the latest build I aim to have it open enough for anyone to be able to create and share markers in an organized fashion.

So here's a reference on how GW2 TacO supports this effort.


What is a marker?

On the face of it, what GW2 TacO does is pretty simple: it asks GW2 what your current location and the camera position are, and draws billboards in 3D space based on that. The trick is knowing where in space to place those points in the first place. The locations come from the information that we already have: your character position. You press a key, the system takes your current position and creates a marker. But if this was all there is to it, there would only be one type of marker and soon enough chaos would ensue.
So besides the position in 3D space, markers need other properties:
Each marker can store all of the information above, and if you wanted you could edit the poidata.xml right now by hand and add these properties to all the markers individually (given that you know the format, but more on that later). So there is a need to somehow organize markers into groups, optimally in a way that lets us keep the option open to change markers individually.

An introduction to Marker Categories

A marker category is a description of a group of markers containing some or all of the information mentioned above in the list. Each marker can have a type field that describes which category it fits into. Any values defined by the category will be set for the marker, unless the marker defines them for itself as well - in this case the value coming from the category is overwritten by the value specified in the marker itself. With this we have a system where we both have grouped data (if I change the image for the category all the markers in that category will change their icon) but with the option of having individual markers a say in how they behave (a marker can still have its own separate icon defined with all the rest of the values coming from the category it is in).

Each marker can belong to exactly one category.

But categories can be organized into a hierarchy.
The point here is that categories themselves will often contain very similar data. Think about all the in-world collectible achievements of late: golden lost badges, lost coins, exalted masks, etc. All of these can easily be marked, and their behavior has to be pretty much the same: if you press 'F' on one of these markers, it should disappear forever because you already have the achievement point for that one and it's irrelevant from that point on. They might all however have different icons. Hierarchic categories solve this in the following way: you can define a category (let's say 'collectible') that defines their behavior: 'disappear forever when activated' (more on how to do this later). Then you define categories under 'collectible' for the examples above: 'goldenlostbadge', 'lostcoin', 'exaltedmask'. These categories will inherit all settings from their parents (in this case their behavior), and you can set icons separately for each of them.

Now to set the category for a marker you need to write out the full name of the category, which is the parent-to-child order combination of the names of the categories separated by dots. For example: 'collectible.goldenlostbadge' will refer to the golden lost badge category. Category names are case insensitive to avoid any confusion.

This is all pretty standard, but the biggest point of this system is that it's expandable. Nothing is hardcoded into the overlay and if you distribute your own marker pack that can have its own category definitions that will seamlessly integrate into the hierarchic system. The final category tree you will see in the overlay is a combination of all the categories loaded from all the marker files.

GW2 TacO stores all data in xml files. There a bunch of these, but the ones used in displaying markers are the following:


All of these xml files have the root tag <OverlayData>. All tags in the xml files are case sensitive.


Markers in the xml files are described under the <POIs> tag under the root <OverlayData> tag. The <POI> tag describes a marker. The following attributes can be set for each marker:
Example:


Categories in the xml files are described by <MarkerCategory> tags under the root <OverlayData> tag. They can be nested to build a hierarchy. Any marker parameter defined in a category will propagate down to categories nested in it unless they opt to override the parameter. Besides the marker parameters described above the only thing that can be set for a category is the name parameter.

If you're planning on creating a marker pack and your markers don't fit into existing categories I suggest you start with an empty poidata.xml and create your categories in that file. This way if you distribute your poidata.xml people can drop it into their POIs directory and load your markers easily.


For the time being you'll need to create new categories by hand using any text editor. Just add the category to your poidata.xml, restart TacO and you're good to go. 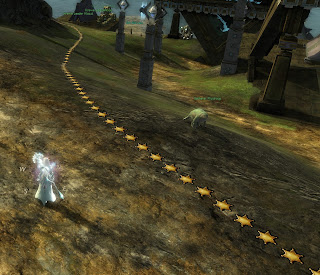 Trails are a feature meant to optimize the creation of routes and to remove marker clutter from the system. A trail is a continuous line that is recorded in a recording session by simply walking around. They are a bit different from markers in that the trail data needs to be exported from the recording session in order to be usable, and it's stored in a dense binary format that's not easily editable by hand.

How to record a trail

To record a trail, you need to have the Marker Editor window open.
You can start recording a trail simply by pressing the Start New Trail button. Everywhere you walk on the map, the trail will be built. You can pause recording with the Pause Recording button, which will simply stop the accumulation of trail points behind you while the pause function is enabled. This should allow you to inspect the results of a recording session before exporting it.

The Delete Last Segment button allows for a rudimentary type of undo. It should come in handy if you miss a jump for example and don't want to redo the whole trail up to that point. It's highly recommended to bind this functionality to a key.

Once your trail is finished, you can export it with the help of the Export Trail button.

Stopping a recording session will also restart the trail, so be careful to always export a finished trail before starting to record a new one.

In order to get an exported trail to show up in TacO, it needs to be added to a marker pack just like a marker. Trails are described by the <Trail> tag and uses the same category system as the markers. If you put a marker and a trail in the same category, the user can hide them both at the same time by hiding the category.
Here's an example trail:

The color, type, alpha, fadeNear and fadeFar attributes function the same as they do for markers.
The trailData tag needs to point to a binary trail. These are the files that you get by exporting them during a recording session. The binary trails also contain the map they were recorded on, so the MapID tag is ignored for trails.
The texture tag points to the texture that should scroll on the trail.
The animSpeed tag is a float value that modifies the speed of the animation on a trail.
There's also a trailScale tag that is a float value that modifies how stretched the texture will look on the trail.

In order to share trails you need to include the binary files into the marker packs just like you do with images.


Placing your own Markers

This is the easy part. Any markers you place will be added into poidata.xml. You can place markers by default using the '+' button and remove them with the '-' button.
If you have the marker editor open (toggle it open in the TacO menu, then turn on window edit mode to move and resize the window to the correct position) and you're standing on a marker you placed, the marker editor will show the type of the marker you're standing on, a button to change that category, the default type a new marker gets assigned to and a button to change the default category. Assuming you want to create a marker pack for similar items all you need to do is select a default and visit all the locations you want marked. The poidata.xml will be written every time you add or remove a marker.
To override category settings for individual markers you'll need to edit the xml by hand for the time being. Later updates will address this issue.

If you create a high quality (all positions marked, precisely) marker pack send it my way and I'll put it in the next release.

If you have created a marker pack that you feel can be shared with the community simply rename the poidata.xml, gather the images you used, zip them all up, and tell people to decompress the package into the POIs directory next to TacO. It's also wise to try the marker pack on a freshly uncompressed download of TacO this way to make sure that the markers load the correct icons.
That's it!

As you might have noted, some features are still under development. Anything that says "not implemented yet" above will be coming soon.